SIRGAS is the Geodetic Reference System for the Americas. Its definition corresponds to the International Terrestrial Reference System (ITRS) and it is realized by a regional densification of the International Terrestrial Reference Frame (ITRF) in the Americas. Besides the geometrical reference system, SIRGAS includes the definition and realization of a vertical reference system, based on ellipsoidal heights as geometrical component and geopotential numbers (referred to a global conventional W0 value) as physical component.

SIRGAS was created in 1993 during the International Conference for the Definition of a South American Geocentric Reference System held in Asuncion, Paraguay. This conference was promoted and supported by the International Association of Geodesy (IAG), the Pan-American Institute for Geography and History (PAIGH), and the US Defense Mapping Agency (DMA), today National Geospatial-Intelligence Agency (NGA). The original acronym of SIRGAS (Geocentric Reference System for South America) was changed in 2001 to Geocentric Reference System for the Americas, since the SIRGAS2000 GPS campaign was extended to North- and Central America, and the United Nations Organization, through its 7th Cartographic Conference for The Americas (New York, January 22 – 27, 2001), recommended to adopt SIRGAS as official reference system in all American countries. Finally, in November 2020, due to an update to the Organization’s statute and its objectives, the name of SIRGAS changed to the Geodetic Reference System for the Americas.

The activities, resolutions, and challenges of SIRGAS are described in the different Newsletters generated during the SIRGAS Symposia.

SIRGAS provides the adequate support to develop and combine all scientific and practical activities related to precise geo-referencing and navigation, Earth sciences research, and multidisciplinary applications. In particular, SIRGAS furnishes the fundamental layer for the geospatial data infrastructure in the region. Consequently, SIRGAS permanently assists the Regional Committee of the United Nations on Global Geospatial Information Management for the Americas (UN-GGIM: Americas), whose main objective at present is to promote the UN Resolution on the Global Geodetic Reference Frame for Sustainable Development, adopted at the UN General Assembly on 26th of February, 2015.

The achievements of SIRGAS as a reference frame and as a technical community are possible thanks to the maintenance of an active network of people and organizations working in the same direction and contributing to the different SIRGAS objectives.

SIRGAS is a non-profit organization based on the voluntary contribution of scientific organizations and national geodetic, cartographic or geographic agencies of the member countries. It was established in 1993 with the purpose of replacing (or modernizing) the legacy national geodetic datums with a unified geocentric reference frame called SIRGAS. In 1998, this purpose was extended to include a unified gravity field-based vertical reference system. At present, the main objective of the organization SIRGAS is to promote the growth, development, long-term sustainability, and appropriate use of the reference frame SIRGAS.

SIRGAS forms part of the IAG Commission 1 (Reference Frames), through the Sub-commission 1.3 (Regional Reference Frames), and it is responsible for the Regional Reference Frame for South and Central America (1.3b). SIRGAS is also a Working Group of the Cartographic Commission of the PAIGH. The administrative issues are managed by an Executive Committee, which depends on the Directing Council, main body of the organization. The official policies and recommendations of SIRGAS are approved and given by the Directing Council. Since this Council is composed by one representative of each member country, one of IAG and one of PAIGH, it is also in charge of communicating the SIRGAS recommendations to the national bodies responsible for the local geodetic reference systems. The scientific and technical activities are coordinated by the Working Groups in close cooperation with the Scientific Council and the representatives of IAG and PAIGH. 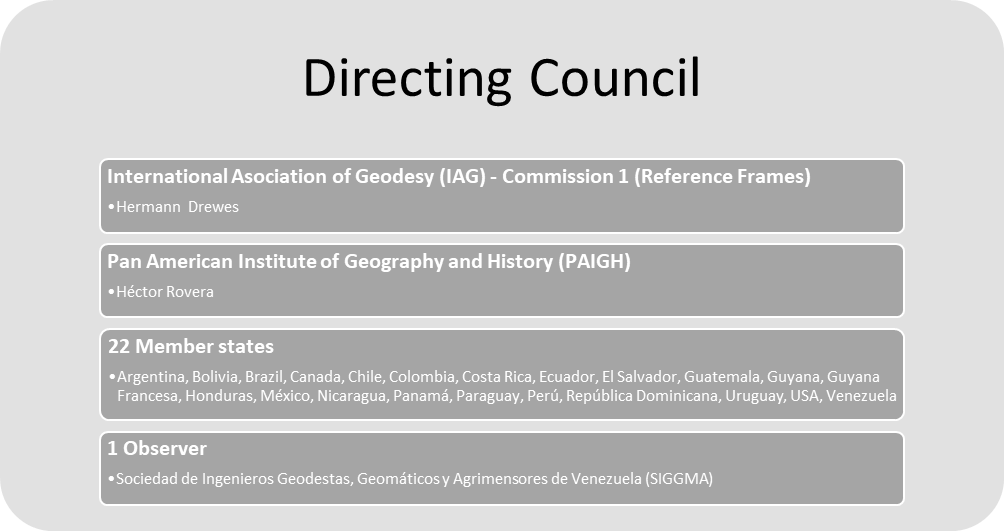 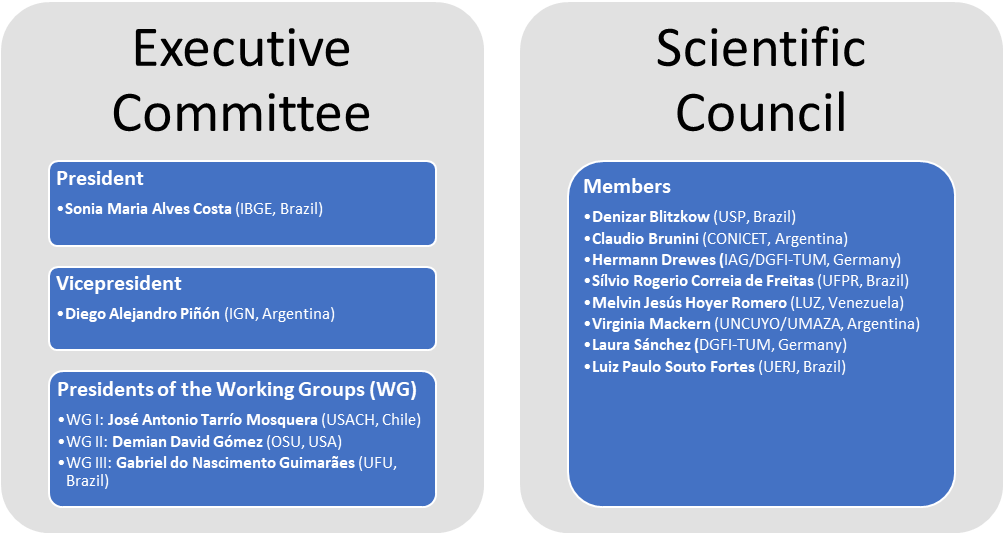